Water Zone offers a complete line of Water Softening and industrial ion exchange products to meet the needs of each individual client. Ion exchange options include softening, two-bed, mixed-bed, packed-bed (to 200 GPM/train), ion specific removal systems (i.e., nitrate, arsenic, etc.), electrodeionization (EDI), and non-regenerable units. All systems are custom design/build equipment. In every case, the customer’s requirements and preferences are considered prior to any design. 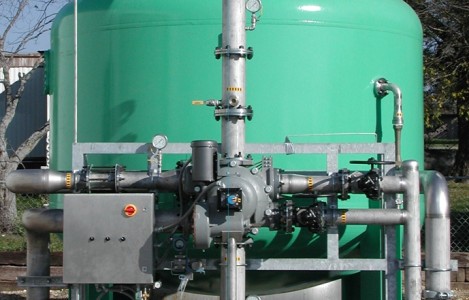 The softener removes “hardness,” in the form of calcium and magnesium ions from the influent water stream.

The resin beads in the regenerated state have a high concentration of sodium ions. These sodium ions have a relatively low electrical potential compared to that of calcium and magnesium, ions. This means ions with a greater potential or charge can easily replace them. When the inlet water flows through a cation resin bed, the calcium and magnesium ions bond to the resin beads, and the beads release sodium ions in exchange.

The resins must be regenerated when water quality becomes substandard as the total amount of water softened or hardness monitoring determines. Regeneration is an ion exchange process wherein the calcium and magnesium ions on the resin beads are exchanged for sodium ions. This ion exchange is achieved by flushing the system with a brine solution that contains a high concentration of sodium ions.

Deionization systems can produce the quality of water required for any specific application, up to 18 megohm/cm resistivity @25C.